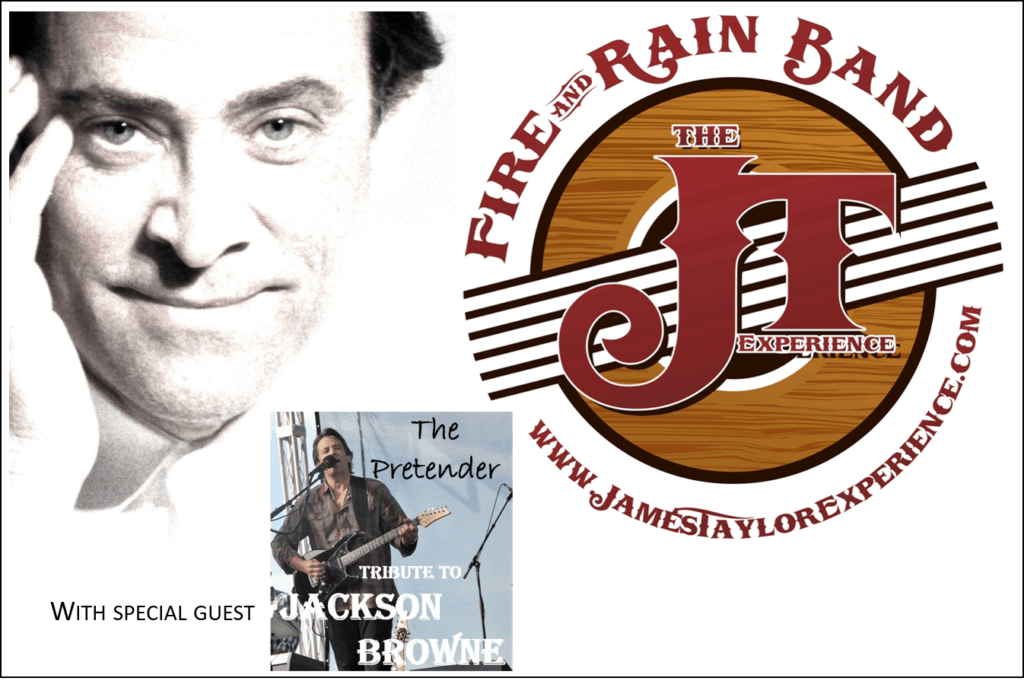 The James Taylor Experience (JTE) Featuring the Fire & Rain Band recreates the intimate energy of a live James Taylor Concert from his heyday in the late 70’s/early 80’s. This dynamic show includes note-perfect renditions of the timeless JT songs that have entertained generations and sold more than 40 million albums since being signed by the Beatles to their “Apple Records” label in 1968.

The timeless JT songs that have entertained generations and sold more than 40 million albums since being signed by the Beatles to their ‘Apple Records label in 1968. And this year since James Taylor and Jackson Browne will be touring together, the James Taylor Experience will feature special guest ‘The Pretender – Tribute to Jackson Browne’ in concerts this year.

The members of JTE have been touring the country in various groups for the better part of the last 3 decades, and have now come together to pay tribute to this great music and the greatest singer/songwriter/guitarist the world has ever produced. The result is a night of fantastic songs and brilliant guitar-work, all fronted by Greg Pitts, a performer who’s look and sound will take you back to the early days of James Taylor’s career. Greg grew up on James Taylor and was a JT disciple on guitar and vocal all the way back to his youth when for the first time he met JT at a concert at West Point, NY in 1981. This fortuitous meeting led Greg to spend years learning the distinctive finger-picking style employed by Taylor, incorporating it into his live performances. Since then Greg has performed the songs of James Taylor for appreciative crowds all over the world.

Audiences are taken back to the early days when “Fire & Rain,” “Carolina in My Mind,” and “Sweet Baby James,” were taking the country by storm, yielding 13 top-ten albums in a career that would include a top ten CD in 2010 with “Live at the Troubadour.” The James Taylor Experience draws these same dedicated fans to celebrate the live performance of songs that made up the soundtrack of their lives. The full live concert performance also includes the rip-roaring, rocking tunes featured in James Taylor’s early live shows like “Steamroller,” “Mexico,” “Honey Don’t Leave LA,” and “How Sweet it Is (to be Loved by You).”

Given Taylor’s catalogue of 13 top ten albums and over 20 charted hits, there is plenty to like in The James Taylor Experience, including “Handy Man, “You’ve Got a Friend,” “Shower the People,” and JT’s covers of the classic Buddy Holly’s “Every Day” and the Drifters “Up on the Roof.”

Whether you’re singing along to the songs you know by heart or dancing in the aisles with other pumped up fans, a night with The James Taylor Experience will be a night to remember.