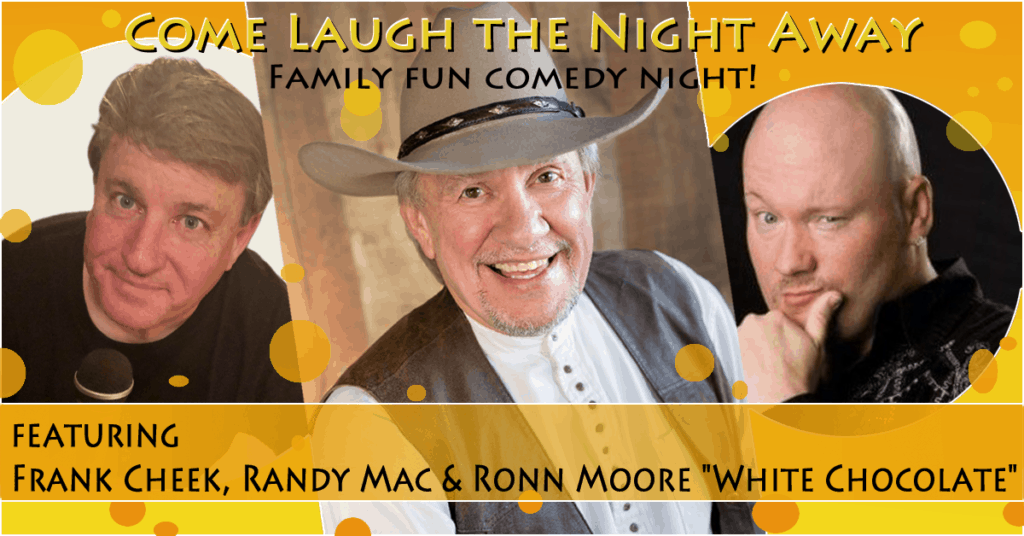 FRANK- has taken his version of a Good Clean Laugh to churches, comedy clubs like the Improv in Dallas and corporate events for companies such as 7/11 and Behr Paints. He’s even been an opening act for visiting members of the Grand Ole Opry. His goal is best summed up with the clowns prayer, “When you made my people smile, you made Me smile.”

RANDY MAC- loves to laugh, and loves to have other folks laugh with him. He uses music, clean jokes/anecdotes, and illusions to get the job done. (He says variety seems to help keep boredom at bay!) At the end of some of his programs, Randy Mac says he has had people say to him, “My cheeks hurt from laughing.” It has also been said that if laughter really IS good medicine, with Randy Mac around…..there’s a doctor in the house!”

Comedian Ronn Moore aka White Chocolate – is originally from the Fort Worth area. Grew up in Rolling Hills, Texas. And graduated from O.D.Wyatt High School. His comedy is a multi cultural multi humorous as well, with stories about being born white, but growing up black like Navin Johnson in Steve Martin’s movie ‘The Jerk”…Comedy has always been an outlet for White Chocolate a way to escape the realities and sometimes pain of daily Life, “escapism is as important at times as a SPAM sandwich”… White Chocolate is a superstar in the world of clean/Christian/family friendly comedy.His Live and devotion to our Lord and Savior is what makes him, HIM. He’s been seen on comedy shows all over your networks. Some of these are: BETs Comic View/HBOs Def Comedy Jam/Showtime/Comedy Central/TvOnes Who’s Got Jokes/NBCs Last Comic Standing and numerous others. This fall you can catch him on NetFlix in his one comedy special and on ZoomTvs paranormal show “SPOOKS” the legend of LilFoot and other Urban myths… Here comes Ronn Moore aka White Chocolate