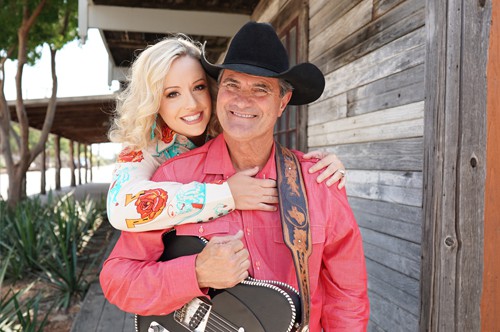 When two successful Texas Country Music artists, Jolie Holliday and Sonny Burgess, find themselves coming together on the same music path, it only seems natural to join forces to become the dynamic duo known as Jolie & Sonny. Add love to the mix, and the result is a talented husband and wife duo committed to creating real, traditional Country Music.
Sonny Burgess, a native of Cleburne, TX, has earned numerous music awards, including CMA Artist Winner, Texas Country Music Hall of Fame member, performing for former governors and presidents, performing at the Grand Old Opry, hosting country award shows, and walking the red carpet at the American Country Music Awards.

Sonny’s humanitarian endeavors include a full time position at Fort Worth Cook Children’sHospital as Director of Clinical Programming. His work in the Child Life Zone allows him to teach the kids to play guitar, write songs, and record those songs for them and their families.

From the twinkle in his eye to his firm handshake, it is easy to see that Sonny Burgess is a true traditional country artist with a heart as big as his home state of Texas.
Jolie Holliday, is a native of Dallas, TX (but she got to Fort Worth as fast as she could), who was inspired and encouraged by her mother to begin performing in her early teens. Jolie’s songs and CDs have reached #1 on the European charts, CMA/Indie World Country Chart, and Texas Music Charts. She received the Young Talent of the Year Award at the German CMA Awards and Female Vocalist of the Year and Album of the Year at the CMA Indie Awards.

The family of Chris Kyle requested Jolie to sing “Soldier” at his televised memorial service in 2013. Her CD “Somebody Who Can”, and especially “Soldier”, is dedicated to Chris Kyle and all Armed Forces to honor their sacrifices. In addition, Jolie was also asked to become a member of Daughters of the American Revolution.

When Jolie and Sonny are not preforming or recording, they bothenjoy working with patients at Cook Children’s Medical Center spending countless hours bringing joy to these most vulnerable children. They also are actively supporting local charitable organizations.