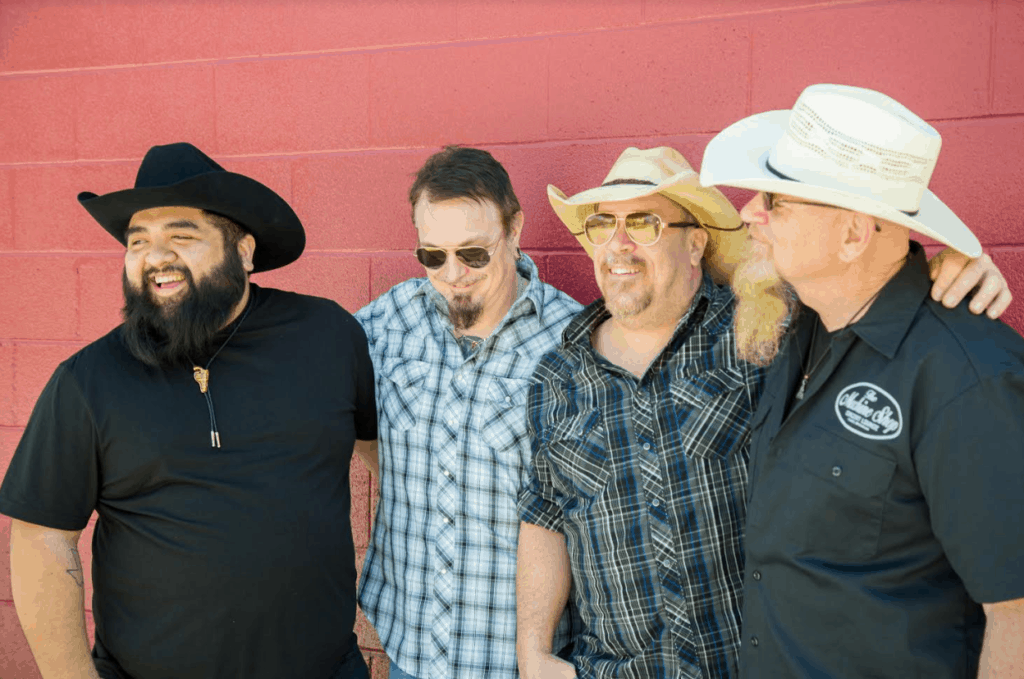 With most of the band having grown up in the shadows of the crumbling auto plants of Michigan, Kin Faux’s music echoes the authenticity and desperation of places like Kentucky coal mines and other pockets of traditional American folklore where the livelihood of entire communities was swept out from underneath them, leaving people to fend for themselves to eke out a living for their families. This upbringing and experience brings a unique character to their brand of music that has been dubbed “Industrial Dirt” by some.

Native Texan, Rico Gonzalez, moved to Michigan in 2015 with his wife and found fiddle work with a Country band, playing the popular cover songs of the time, where he met Dan Currier. The two of them hit it off well on long drives to and from gigs around the region. At the same time, Jakey Black IX and RB Suave comprised half of a prolific Outlaw Country band that also made its way around the state. The two projects overlapped occasionally, and as the pair of duos overlapped more and more often, they discovered a mutual appreciation for Texas/Red Dirt music, contacts were made, and an experimental side project called Kin Faux was born. The band was inspired by the Texas/Red Dirt artists they all enjoyed such as Randy Rogers, Kevin Fowler, Roger Creager, Turnpike Troubadours and others. Unsure of how this brand of music would be received in Michigan, the band played sporadic off nights as more of a creative outlet, but it quickly became apparent that there was an unexpected and thriving Texas/Red Dirt scene in Michigan that was hungering for exactly the kind of music the boys were offering. Kin Faux shows rapidly made a name for themselves as high-energy, vastly entertaining events and the band found themselves being regarded as “the band to see” in the area. It was time to bring this group out of “side project” status and into the forefront.

Within a few months, the boys were regularly booked all over the Midwest and honed themselves into a juggernaut of raw live energy and musical performance that became ubiquitous throughout the state. Within six months of being formed, they garnered wins as Review Magazine’s Best Country Band, and Rico as Best Country Musician in 2018. They began to forge relationships with influential artists such as Bobby Randall (Sawyer Brown, Confederate Railroad) and renowned songwriters like Bernie Nelson (Chris LeDoux, John Anderson, Confederate Railroad, Conway Twitty).

In the ensuing year, the boys made a trip to Mainframe Studios in Nashville to record their debut EP (produced by Bobby Randall) and began to expand their touring to include several tours of Texas itself to see how their brand of Texas music would be received. Each tour built on the successes of the previous tour and Kin Faux started to become regular fixtures at such iconic venues as Luckenbach, John T Floore’s and Gruene Hall, and working with such acts as Kevin Fowler, Roger Creager, Rick Trevino and Trace Adkins, among others. Kin Faux’s EP was released in the fall of 2018 to rave reviews, garnering five more wins from Review Magazine’s Music Awards including Best Country Band, Best CD Release for the band and Best Multi-Instrumentalist, Best Country Songwriter and Best Country Instrumentalist for Rico.

Their four successful tours of Texas found them cultivating relationships with more legendary songwriters, such as David Lee (Cody Johnson, Montgomery Gentry, Tim McGraw, Trace Adkins, George Strait), Brett Beavers (Lee Ann Womack, Toby Keith, Dierks Bentley) and Jim Beavers (Toby Keith, Dierks Bentley, Josh Turner, Blake Shelton, Chris Stapleton), and it began to be obvious that Texas offered opportunities that couldn’t be found anywhere else, so, in true Kin Faux fashion, they once again piled into the van as a unit and hit the road, this time with permanence on their collective minds and relocated to San Antonio to pursue success full-time.

They released their first single, Teardrops on the Rocks (from their self-titled debut EP) in the summer of 2019, which peaked at #20 on the Texas Regional Radio Chart. While working this single, mid-tour and between dates, the boys went back to Nashville to record again, this time to Sony Tree Studios with Jim Beavers at the helm. This session produced their second single, Locked Up in Lubbock, released in March of 2020. Even with the COVID lockdown stymieing their touring and promotion efforts, Locked Up topped out at a respectable #26 on the T3R Chart.

Kin Faux is currently finalizing new material to round out their sophomore effort, wrapping up the recording in October, 2020, at Sony Tree in Nashville with Jim Beavers producing once again. Their current single, Honky Tonk in Heaven is in the top 20 on the Texas Regional Radio Chart and still moving up at the time of this writing. The band is also working on a series of episodes for a web series entitled Honky Tonk Hump Day, which will showcase various historic honky tonks and dance halls around Texas and will feature live performances by Kin Faux and various special guests from all over the state. The series is currently in production and is slated to debut soon.