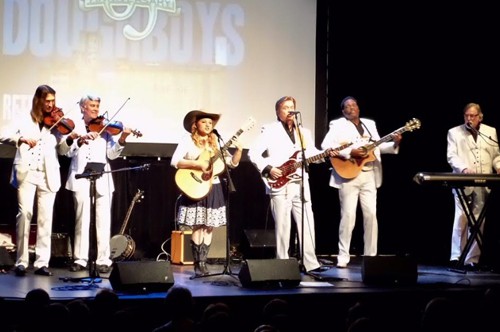 In 1931, a man who would become a Texas music legend named Bob Wills brought a band soon-to-be-called The Light Crust Doughboys to the Burrus Mill Flour Company. It was the beginning of the great American Jazz age, and the glorious time of Benny Goodman, Tommy Dorsey, Glenn Miller and Gene Krupa. Bob Wills and his band, The Light Crust Doughboys, introduced the music genre of Texas Western Swing. Though most of the other great “big bands” disappeared along with the flour company, The Light Crust Doughboys are still performing, recording and “On The Air.”
The band initially performed live on the high tech phenomenon of that generation – the radio – and sang commercials for the Burrus Mill Flour Company. W. Lee “Pappy” O’Daniel ran the company and the flour company owned the band. Although he fired Wills a couple of years after the tremendous initial success of the band, The Light Crust Doughboys continued performing for huge audiences around the country for decades. Despite O’Daniel’s rise to political fame by becoming Governor and U.S. Senator from Texas, and the only politician who ever defeated Lyndon Johnson, O’Daniel believed he would best be remembered for starting The Light Crust Doughboys, one of the most popular bands in music history.
Some of the premier country and western musicians in the world have filled the ranks of the Doughboys, and hundreds of musicians claim to have played with the band when it came through their towns. Over the years, the band boasted its own touring buses and private planes. As with all stories in history, the sad times came with the passing of the once bright stars into their years of illness and ultimate deaths. But somehow, new members came along, and the band would reorganize itself into a cohesive crowd pleaser that just would not disappear. Each new generation of musicians had a cadre of even brighter stars to lead the upward way.
Enter music prodigy, Art Greenhaw, a Mesquite, Texas native who began his musical calling at age 3. A master of several instruments with a vocal range that is the envy of his peers, Greenhaw started working professionally with the band in 1983. By 1993, he had become the youngest official member and co-bandleader of The Light Crust Doughboys. Upon the death of perhaps the greatest four-string banjo player in history, Smokey Montgomery, Greenhaw became the bandleader. In 2003, he produced and won the Grammy Award for “Best Southern, Country or Bluegrass Gospel Album of the Year” for the album WE CALLED HIM MR. GOSPEL MUSIC: THE JAMES BLACKWOOD TRIBUTE ALBUM. This album featured The Light Crust Doughboys, the Jordanaires and Larry Ford.
The Light Crust Doughboys have played prestigious festivals throughout the United States, have toured Austria, and make frequent television appearances. Current Light Crust Doughboys have over 60 years of combined experience playing in The Light Crust Doughboys band and performing Texas-style country music. The Light Crust Doughboys were named The State of Texas’ Official Music Ambassadors by the 74th Texas Legislature, are currently presented in association with Charles Stone Management (Elvis Presley Tour Producer-Director 1970-1977), and are inductees in the Texas Cowboy, Texas Western Swing, Rockabilly, Texas Music, Texas Radio, and Cowtown Society of Western Music Halls of Fame. In every personal appearance by The Light Crust Doughboys, the band pays tribute to its legacy by honoring the musical contributions of Bob Wills, Milton Brown, and especially, Marvin “Smokey” Montgomery, a Light Crust Doughboy from 1935 until his passing in 2001.
In 2013, classically trained violin virtuoso, Marek Eneti, surprised the world by joining The Light Crust Doughboys. His handsome eastern European looks and magnificent showmanship highlight his artistry of playing electric lighted violins and his ability to embrace Western Swing music with an immediate proficiency never seen in the annals of country music before this astonishing alliance!And, as has been the case for over 25 years, Western Swing Hall of Fame violinist Jim Baker is a centerpiece of The Light Crust Doughboys’ sound, as was Bob Wills before him. And the twin violin spectaculars of Marek and Jim are truly show-stoppers!
All current Light Crust Doughboys have stellar solo careers of their own, so a genuine Light Crust Doughboys stage show takes place when “four or more members come together” for “The Light Crust Doughboys In Concert”. But over the course of a season or a year, fans can catch all Light Crust Doughboys’ members at various shows at various times.
What makes all this a true, American, dream story is that Greenhaw Records is a small independent label succeeding without the financial marketing power of the major labels from Nashville and Los Angeles and New York. Though the industry titans said it couldn’t be done, Greenhaw’s knack for collaboration and outside-the-box concepts have jettisoned The Light Crust Doughboys’ fame to new heights year after year.