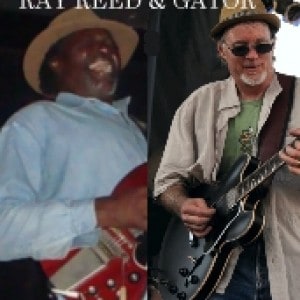 That’s Ray Reed. Ray is 81, when he was 14 and a sharecropper in Maypearl, Tx. he hitchhiked to FW and started playing on the streets. He became successful as a musician and soon joined the band with Freddie King (deceased member of Blues and Rock Halls of Fame) who Eric Clapton called his true mentor. After Freddie passed on, Ray and his late sister Lady Pearl had a band that played all over Texas for 25 years. Ray is a veteran, a former policeman and mechanic which he did as day jobs while playing music 3-4 times a week at nights. Ray and I met 8 years ago and started the Ray Reed & Gator band. Last year, at a ceremony at Bass Hall, the city named Ray a Living Legend “for his positive effect on the culture, life and entertainment of the city of Ft. Worth and Texas,”

For 6 consecutive years the national Reverb Nation has named Ray Reed & Gator one of the top ten traditional blues in Texas.