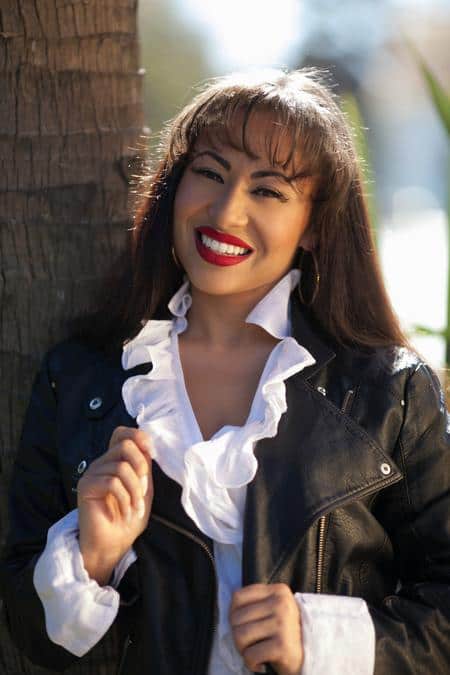 AMANDA SOLIS DANCES TO HER OWN CUMBIA

(Houston, TX) Amanda Solis has performed for 30,000 fans at White Sox Stadium in Chicago. She has entertained Dr. Phil in Hollywood. She appeared on national TV in a highly rated docudrama.

But she’d finally and truly like to introduce herself.

The Texas city native has spent the last few years paying tribute to Tejano icon Selena. She expertly recreates the late late singer’s looks, moves and voice onstage. It’s kept her booked and busy throughout Houston and around the country. Amanda was one of five finalists selected to attend the Madame Tussauds Selena wax figure launch party in Los Angeles and portrayed the singer in a documentary on the Reelz channel.

But Amanda is finally ready to put the bustier aside.

Her first original single, “Kiebra la Bota,” is a party anthem in the style of zapateado, a Mexican dance characterized by continuous foot stomping around a dance floor. The lyrics namecheck Houston and Piedras Negras, Mexico, where Amanda’s parents were born.

“I was just excited alone to be working on my music as Amanda,” she says. “I’ve been paying tribute to Selena for so long. She’s inspired me and paved the way in many different ways.”

Zapateado is immensely popular at quinceañeras and weddings, a point that wasn’t lost on Solis as she performed at the events around the country.

“The dance floor would just fill up whenever the zapateado songs came on,” Amanda says. But it also made me think, ‘There are only men singing these songs. I need to do a song like this from a woman’s perspective’.”

“Kiebra la Bota” was produced by El Dusty and Mariano Herrera for the Houston-based Street Science Entertainment label. Corpus Christi native Dusty is a pioneer of nu-cumbia and cumbia electronica, which filters the traditional sound through synths, electro and hip-hop.

“They came to us to get our sound but definitely brought ideas on what they wanted,” Dusty says. “I think she has loads of talent and has been practicing for her shot all her life.”

The end result, a six-song EP cleverly titled “Quinceañera Queen,” is due in 2020. They worked for several months to develop Solis’ own sound, dubbed “cumbia-Americano,” a blend of Tejano and regional Mexican rhythms with contemporary flourishes. It’s an exciting, bilingual mashup that moves forward genres that have desperately needed the push for a long time.

“Let me show you who Amanda is and do something different,” she says. “My traditional roots are still there, with a little twist.”

People would often point out Amanda’s resemblance to Selena. But less than five years ago, music wasn’t even an option. Amanda attended the University of Houston, where she was a cheerleader, and College of the Mainland in Galveston, earning her associates degree and eventually a real estate license.

She says the Selena tribute started “by accident,” an oft-used phrase by performers that rings true in this case. Amanda ventured out one night to a neighborhood bar, where a friend prompted her to sing “Bidi Bidi Bom Bom” in a karaoke contest.

She won first place that night, and when she returned for the next round, she dressed up in one of her mother’s retro outfits, which reflected the ‘90s glam of Madonna, Janet and, yes, Selena. The reaction to her look took Amanda by surprise. Several months later, she accepted an invitation to sing for free at a quinceañera.