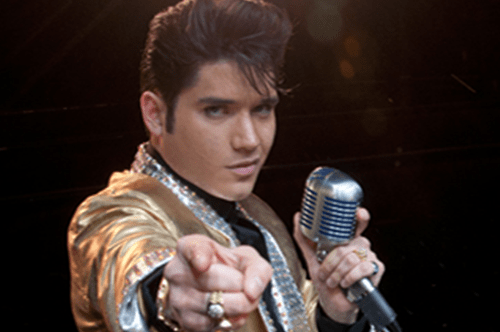 Victor Trevino Jr is rated as one of the top Elvis Tribute Artists in the world. While his roots are from Texas, he loves taking his performance everywhere. He has been invited to perform many stages all over the world, including Australia, Brazil, Canada, Denmark, Finland, Japan, Mexico, Spain, Sweden and the UK.

Victor was recently asked to represent Graceland for a special appearance on CNN where he was interviewed and sang a medley of Elvis songs. He performs for the world’s largest tribute show “Legends in Concert”, including a residency in Las Vegas where “Legends in Concert” is still longest show running on the Las Vegas Strip. He has also had a residency in Waikiki,  Hawaii with Legends In Concert at the Royal Hawaiian Theater. Victor was in the original cast and still periodically performs on the “Elvis Lives” tour. The only Elvis Tribute tour production sanctioned by Elvis Presley Enterprises Graceland.

Currently, Victor is touring with “Presley, Perkins, Carl & Cash” & “One Night With the King” performing in casinos and theaters all over the United States and Canada. He also performs in “An American Trilogy” the only Elvis Tribute show that tours all across the Australian continent.