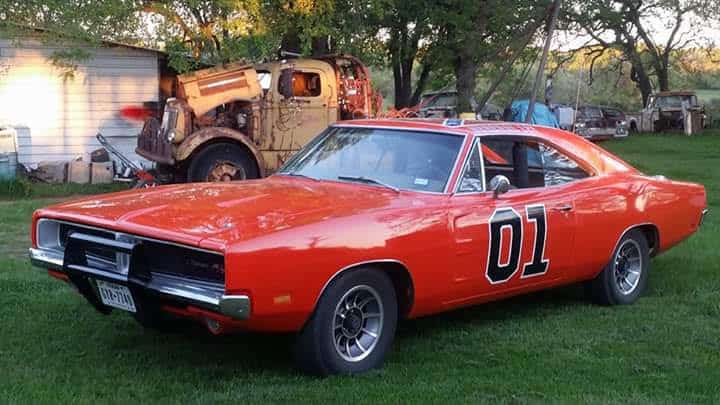 CMA Female Vocalist of the Year Janie Fricke will be appearing at the New Granbury Live on June 2 at 7:30 pm. Some people may not know Janie also appeared in the original series of The Dukes of Hazzard in an episode called “Happy Birthday General Lee”.  Janie was the only musical artist to ever appear in the series in a non-singing roll.

Car enthusiast Keith Montgomery from Cleburne has been a long-time fan of “The Dukes of Hazzard” and in 2008 built a replica of the famous General Lee automobile. The paint color’s code was provided to Keith by the Dukes of Hazzard head mechanic and was also provided the authentic decals. Since completing his “General Lee” the vehicle has appeared at the Dukes Fest at the Atlanta Motor Speedway where it made three honorary passes around the track. This past year the car was selected as “Bo’s Pic” for the best General Lee at John Schneider’s personal event in Holden, Louisiana. The car has been autographed by cast members Catherine Back (Daisy Duke), John Schneider (Bo) Tom Wopat (Luke), Sohney Shroyer (Deputy Enos Strait), Ben Jones (Cooter), Rick Hurst (Deputy Cletus Hogg) Byron Cherry (Coy Duke), James Best (Sheriff Roscoe P. Coaltrain), Don Pedro Colley (Sheriff Ed Little), and Lindsay Bloom (Mabel Hogg).

Mr. Montgomery will have his award winning General Lee vehicle at the New Granbury Live on Saturday starting at noon where it will be on display in the front of the theater.

At approximately 6 pm June 2, Janie Fricke will autograph the vehicle.